Thursday 10th February 2022, we were very happy to organise the traditional annual coding contest at ISEP. The contest has been running for more than 15 years.

This year’s contest was different from previous ones as we did it on CodingGame with ClashOfCode, and it was a lot of fun ! We had very cool players that participated in the contest in a fun and nice atmosphere.

The students’ level of programming was very high. The contendants had great skills. Some problems were resolved extremely quickly !

We did 9 Exercises on ClashOfCode, categorised in 3 modes: either « quickest » (solve the problem as quickly as possible), « reverse » (find the algorithm, having only inputs and outputs)  or « shortest » (use the smallest number of letters in your algorithm)  modes. For each exercise, each student scored points in the following way: 25 points for the first, 18 for the second, 15 for the third, then 12, 10, 8, 6, 4, 2. There was a bonus of 1 point if a problem was solved under 1min30 and under 80 characters for the « shortest » mode. Many bonus points were scored, that was very impressive ! Then 2 leaderboards: 1 in solo and 1 in team.

The suspense was intense in both leaderboards. 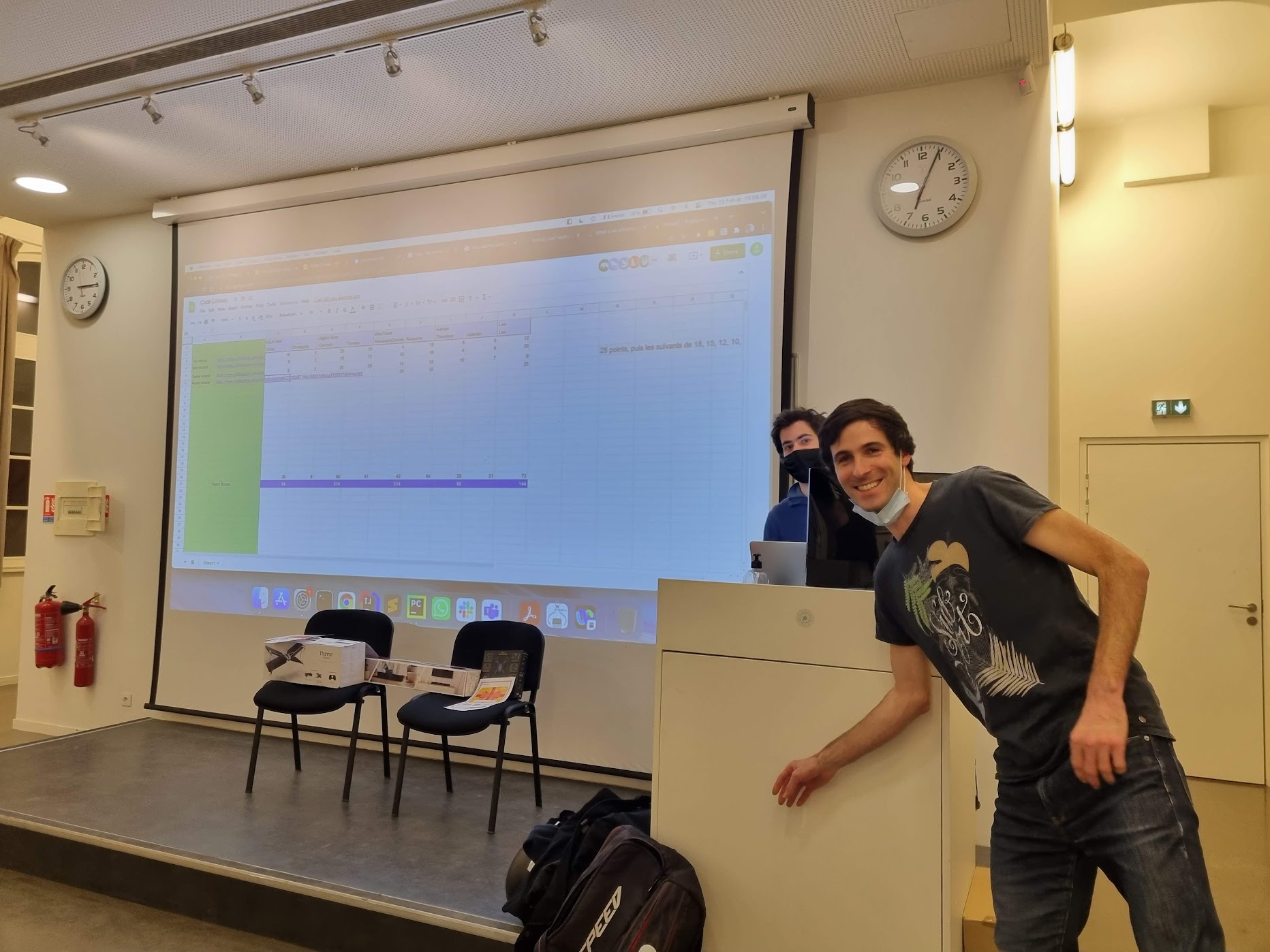 Thanks to Fabien for helping with the event organisation and getting the prizes for the winners. And thanks Guillaume for all your contribution to keep the tradition alive 🙂 !

Let starts with the story on the Solo leaderboard.

On the first game, Clément hits first with a very quick resolution on 1:39. He shows he is there for the win ! Benjamin and Knoblaucherr complete this first podium. Here is the first result: 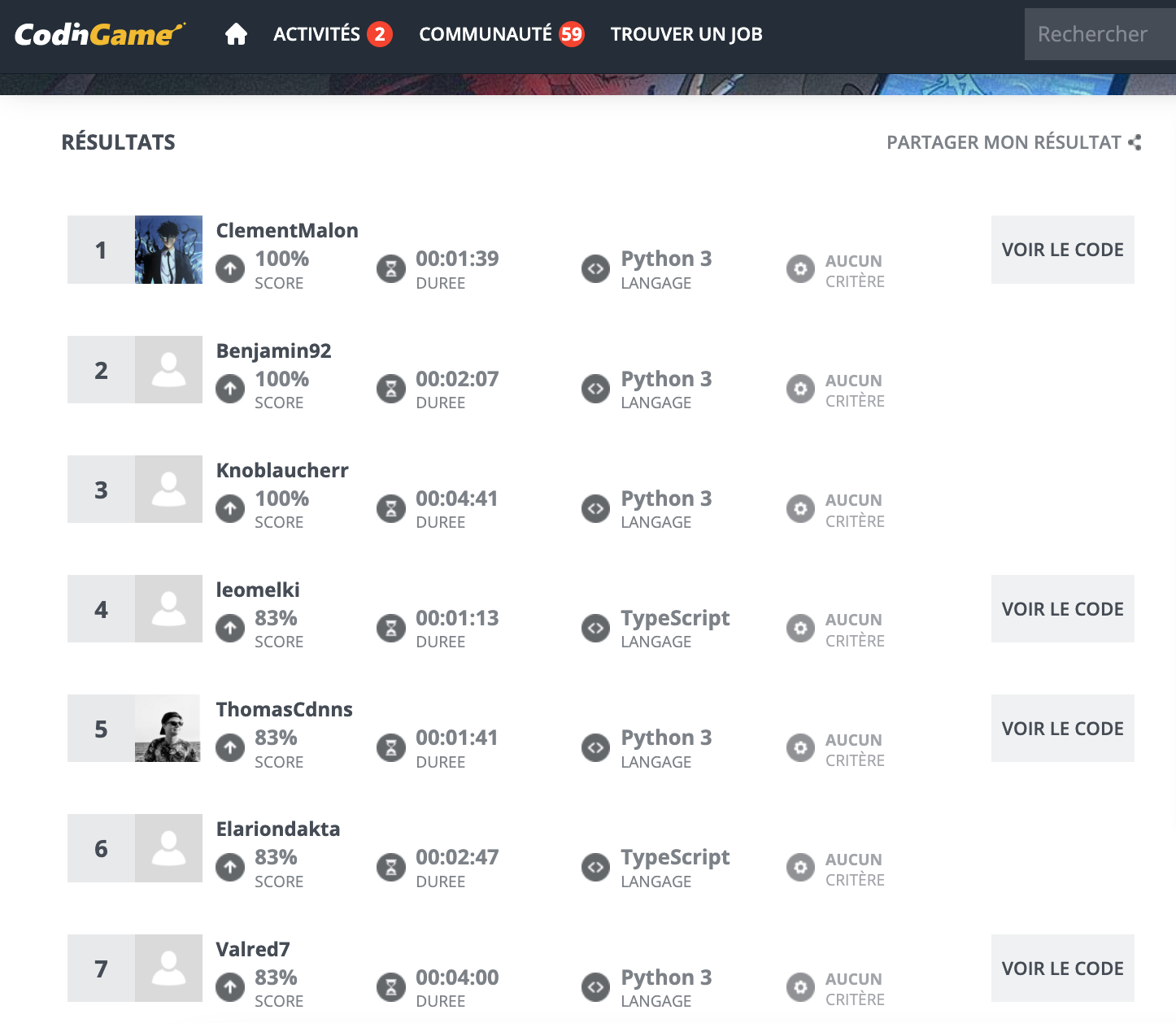 In the second game, Léo impressed everyone with 1:12 resolution in Typescript. Benjamin and Clement completed the podium with 2:25 and 2:51, both on their Python gun.

In the third game, we switched to « shortest » mode. Meaning you have 15min to code the shortest possible code. Here Clement was brave and submitted his code at the 5th minute with only 45 characters. It was bold as his competitors had still 10min to do a better score. But no one would beat Clément’s score. At this point, Clément took the lead with an impressive advantage. We all thought that it would be an easy road for him. But no, an incredible drama took place !

In the 4th game, a « quickest » mode one, we saw an incredible situation where Clément submitted his algorithm before testing everything. Unfortunately, one test case was missed and therefore he didn’t complete the exercise. He finished 8th, Leo took the  first place with an impressive 1:35, missing by only 5sec the bonus.  Alexandre took the second place with 3:02 and Benjamin completed the podium with 6:11. This was the start of a long series of high scores from Léo !

5th game, another « shortest » mode,  Alexandre took the lead on that one, followed by Léo and then Benjamin. At this point, Clément, Léo and Benjamin were pretty close. The first place could be taken by any of them ! 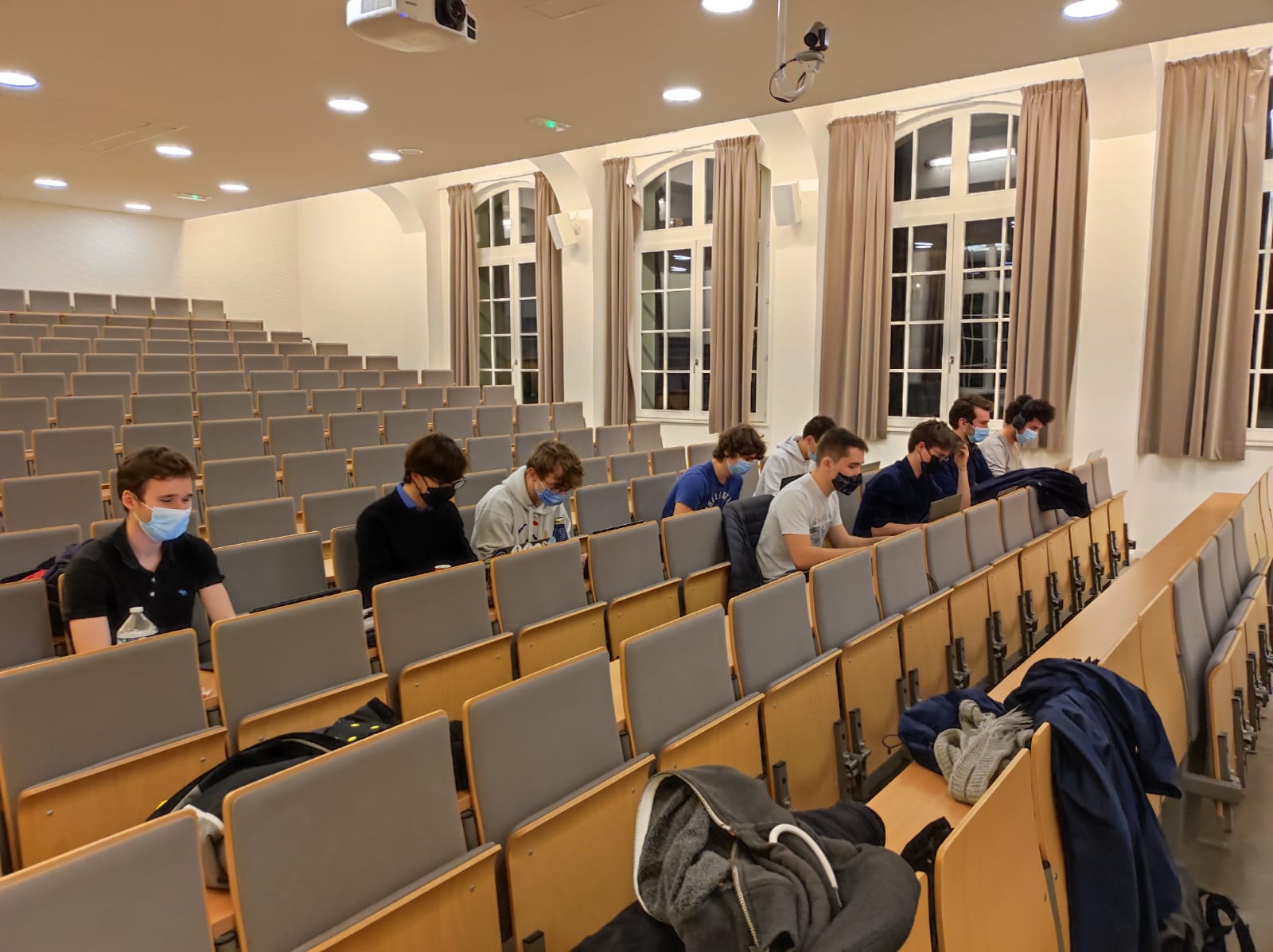 6th game: It was one of the hardest problems. Léo was impressive. He shot a very elegant solution using the power of the native Date library in Javascript. This allowed him to pass all the test cases in only 3:34. In the meantime, everybody struggled to pass all the tests. Theodore is the only one after Léo to pass all tests and finish second. Valentin finishes 3rd by passing 80% of the tests. Now Léo was very far ahead and we thought it would be an easy win for him.

7th game: The fight was tough, Clément showed he hadn’t said his last word. He finished first and took the bonus point in 1:25. Léo finished second, and Thomas 3rd place.

8th game: This was a big moment ! This was supposed to be the last game and Léo was very close to winning the contest. But that contest was full of surprises until the end. Benjamin took a very nice win and a bonus point in 1:26 in an exercise that wasn’t so easy. The exercise was on coding a variation of Fibonnaci. But there were tricky cases to handle. Alexandre took the second place, and Clément took the third one. In that game, Léo only had to finish at least 8th to win the contest. But Léo was kind enough to let the suspense continue until the last very second. He finished 9th, head to head with  Clément, who had just equalised with him.

We had to playone last game in order to decide between Léo and Clément.

9th and last game, this was a « quickest » mode. Clément surpassed himself and resolved the problem in only 52  seconds ! His teammate Thomas finished close behind in 56 seconds. Benjamin completed the podium with a 2min resolution. Léo struggled with  this problem and finished in 8th place in 4:37.

The final leaderboard was: 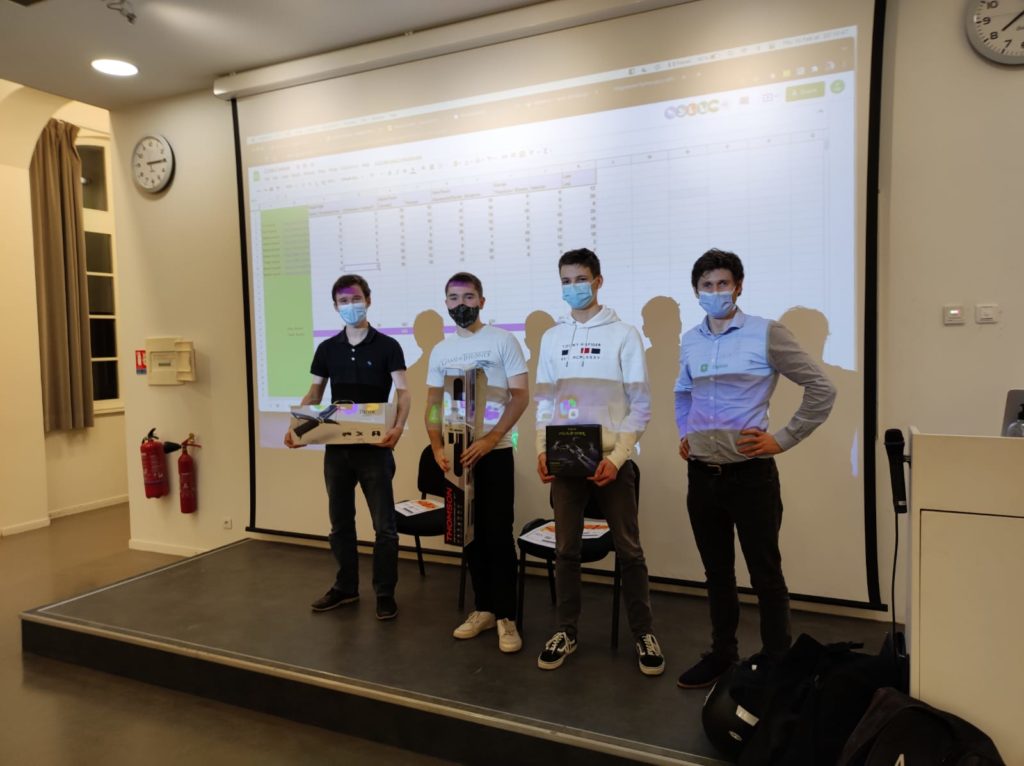 The others after 3rd places have shown a huge amount of skills and we congratulate them for what they did :

The team’s leaderboard was also very disputed. This was a big fight all evening.

The 1st place was a fierce fight between the AlphaTeam and the AlexTeam. The AlphaTeam led until the 5th game, when the AlexTeam took over the first place for a while. After a strong fight in the last few games, the AlphaTeam came back and won the contest. What a match !

The 3rd place was a very tough battle between Léo and Garaje. Fun fact, at the end of the 8th round, Garaje had a short lead. They were supposed to win the 3rd place because the match should have ended at round 8. But with Clément and Léo ex aequo, we had to run the 9th round. We asked Valentin and Theodore from Garaje if they were OK to take this chance. They were good players because they agreed. In the end they secured 3rd place with even more points, so all finished well for them ! 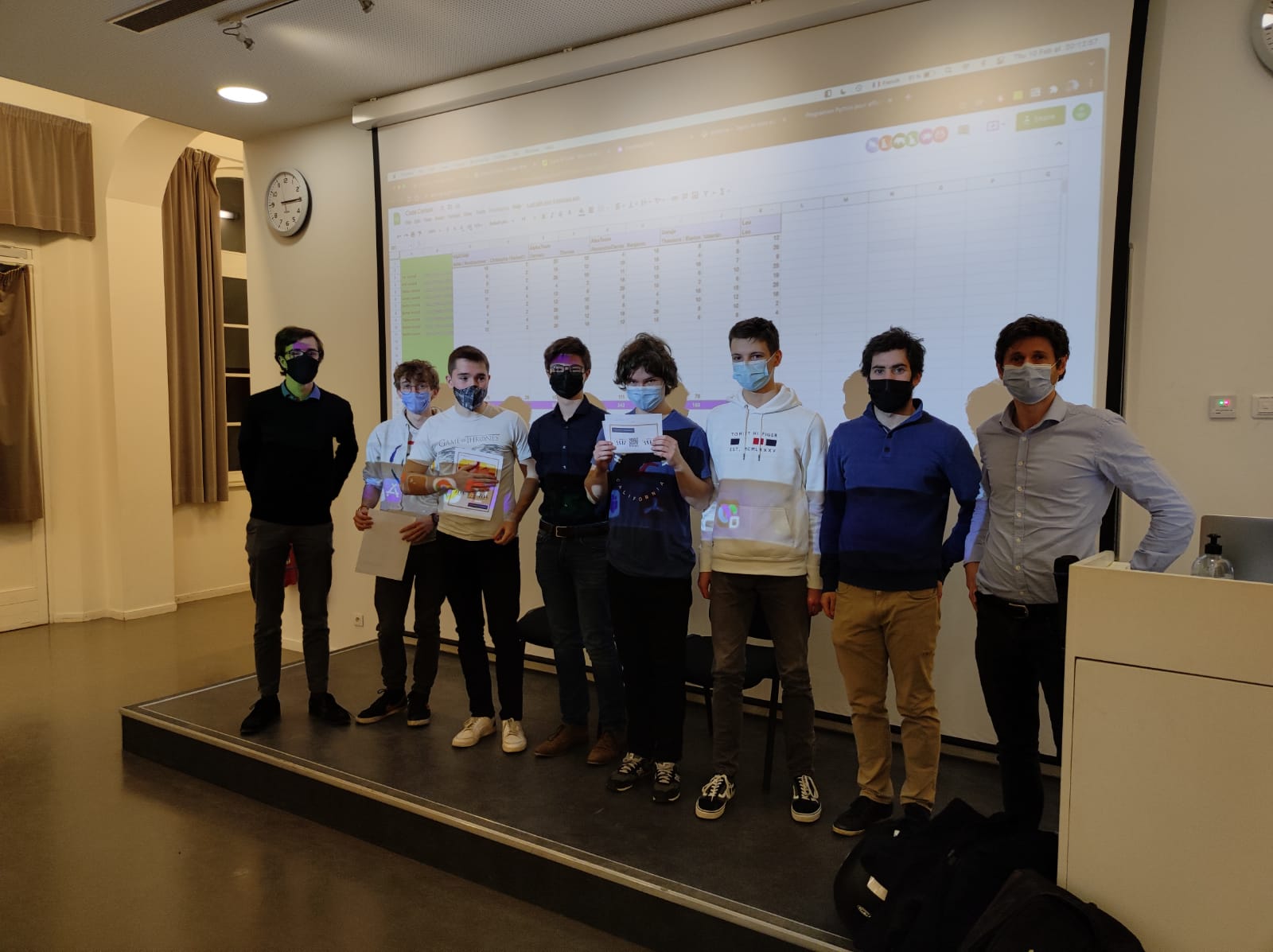 Thanks to all the participants for having shown such a high level of skills. The suspense was intense. There was elegant code. Nice solutions. Also thanks for the smile and fun. This really was a cool event to do.

Thanks also to Fabien for helping with the organisation and providing the lots for the winners. And thanks to Guillaume for this great semester of algorithms. 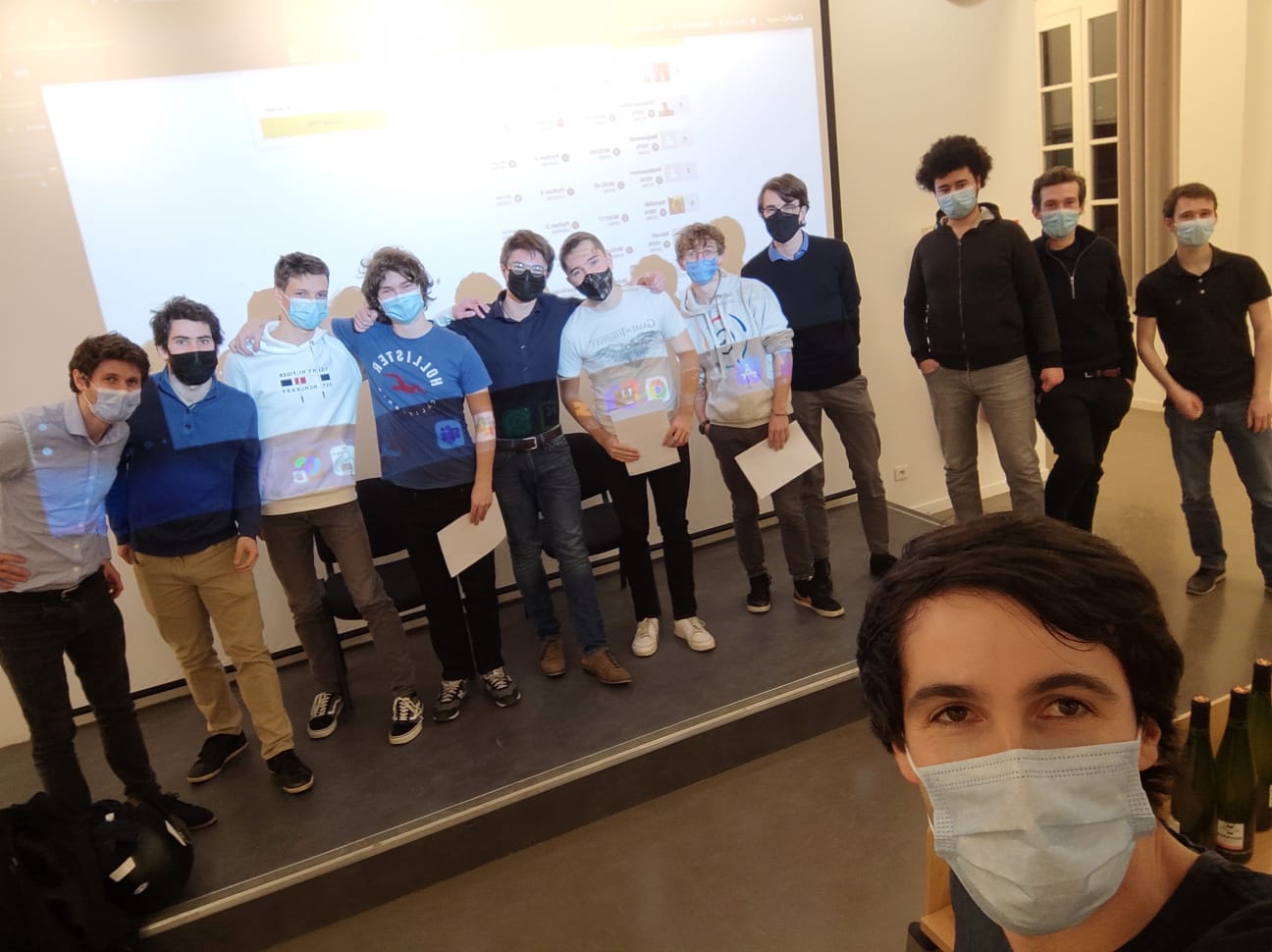 Thanks also to Zest Planche for the nice buffet at the end and thanks to CodingGame for providing such an amazing platform !